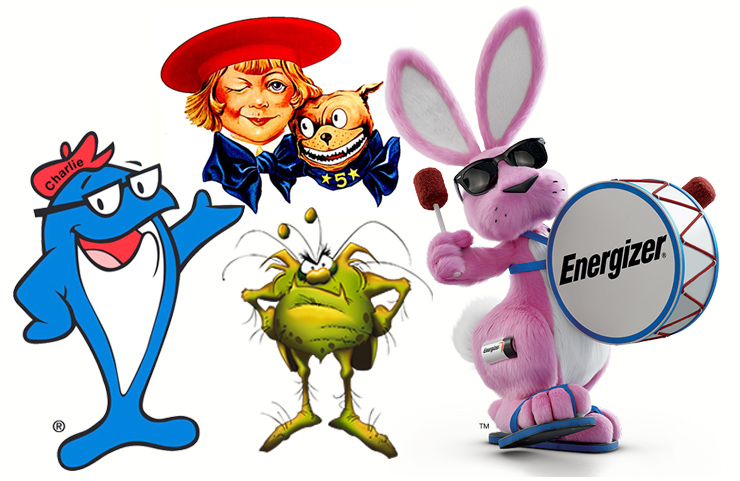 Thanks to their near mystical power to create affinity between a business and its customers, I’ve long been a fan of creating cartoon mascots for marketing purposes.

According to Stephen Heller, in an article that appeared in the Atlantic, “We’re all susceptible to (a mascot’s) lure. They infiltrate our subconscious, colonize our homes and cultivate images of wholesome goodness.” https://www.theatlantic.com/entertainment/archive/2015/06/theyre-grreeaat-the-enduring-charm-of-advertising-characters/396233/

To “wholesome goodness,” I would add the qualities of charm, sex appeal, power, and even magic. When done right, mascots can become embedded of our culture in ways well beyond their original purpose of hawking goods.

The term, mascot, comes from the French word ‘mascotte‘ which means lucky charm and is a derivative of the word ‘masco‘ meaning sorceress or witch. From its origin, the term is associated with good luck spirits and animals. As Exhibit A, I submit Sir Charms the leprechaun who’s been shilling Lucky Charms marshmallow sprinkled breakfast cereal since 1964.

Advertising mascots have been around for a long time. One of the first was Buster Brown. Originally a comic strip character created in 1902, Buster Brown was adopted as the mascot of the Brown Shoe Company in 1904 along with his sweetheart Mary Jane, and his pit bull, Tige. The brand’s slogan – burned into my cerebral cortex from the age of three – is, “I’m Buster Brown. Look for me in this shoe. That’s my dog, Tige. Look for him in there, too.”

Despite exposure to countless advertising mascots since toddlerhood, my hands-down favorite mascot today is the Energizer Bunny®.  An indication of the staying power (pun intended) of the manic, pink, lagomorph in flip-flops is that Energizer Bunny is now a common description for any hyper-active person.  The apex of public recognition occurs when the brand name merges into the everyday language in the fashion of Cadillac, Xerox, Jet-Ski, Jacuzzi, Chapstick and Zamboni, to cite some of the brand names that have shed their product specificity to become common nouns, adjectives and verbs.

Brand purists will argue that in becoming generic terms, brand names lose their selling power. Personally, I contend that every time someone uses “Cadillac” to describe a product that sits atop of its marketing niche, that usage constitutes free advertising for General Motors and reinforces the value of the Cadillac brand.

Since their origin, advertising mascots have been used by image-conscious brands. So effective are they in burrowing into our collective conscious some are recognizable by their first names alone: Charlie, Tony, Ronald, Betty and Mr. Peanut.  Thanks to their memorability, longevity, and cultural impact, well-thought-out and carefully designed characters have helped many small businesses grow into the dominant brands within their fields.

To give credit to where it’s due I have to tip my hat to a Chicago adman, Leo Burnett. Burnett is credited for changing typical 1960’s advertising from lengthy product descriptions with complex buying arguments to mascots that personified easily-understood benefits. His impact on the American culture was such that Time Magazine cited Burnett as one of the 100 most influential people of the 20th century.  Even if you don’t recognize the name, you know his creations. Tony the Tiger, Toucan Sam, the Pillsbury Doughboy, the Jolly Green Giant, Charlie the Tuna, and the Raid insects are only a few of the original brand mascots created by the Leo Burnett agency.

If you’d like to benefit from this phenomenon here are some basic Do’s and Don’ts: