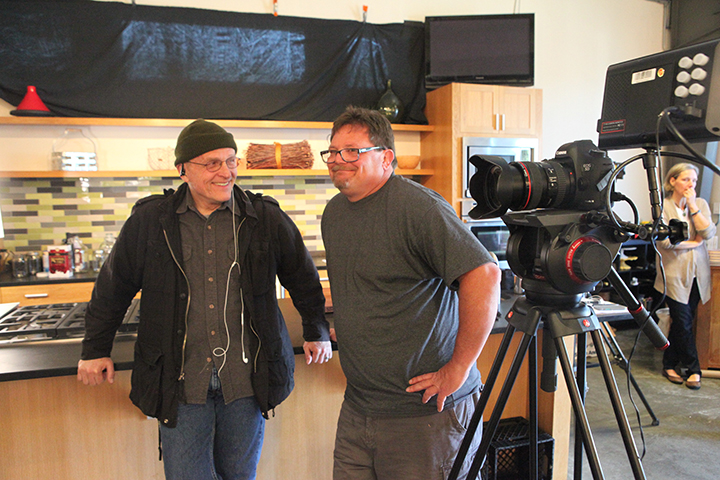 The photo above, shows Alan Campbell and me on the set of the first episode of Spoiled to Perfection.

In a past life – a few years after the era depicted in Mad Men –  I was an ad agency creative and made a whole bunch of TV commercials. Recently, I returned to form in the role of Producer / Director of a new web TV show Spoiled to Perfection which see, and read about, on the website https://spoiledtoperfection.com/ and the Facebook page https://www.facebook.com/spoiledtoperfection.

Spoiled to Perfection features local entrepreneurs who – as the title says – practice the arts of pickling, fermentation and other food alchemy. Featured on our pilot episode was Jennifer Harris, local fermentation teacher, founder of the Farm to Fermentation Festival, and instructor of the Vital Alchemy classes held at the Sebastopol Grange

The project began with a request from the owner of Bubbies of San Francisco, maker of the popular Bubbies Kosher Dill Pickles and a longtime client of mine https://bubbies.com/ for a unique television show that would explain the intricacies and merits of food preservation beyond just the promotion of pickled or fermented products. I immediately retained Shoot Blue Productions operated by Geyserville residents Leslie and James Simmons to provide production support. Alan Campbell, a nationally recognized North Bay food and wine photographer, will guide the show’s distinctive visual style. Harris is a perfect fit for the pilot episode.”

When you mention fermentation and the first thing that leaps to mind is proliferation of winemakers, craft brewers, cider makers and distillers of spirits, ports, and aperitifs,” she says. “But when you peel the onion a little more you find that Sonoma County teems with entrepreneurs, restaurants, chefs and countless cooks exploring the mysteries of pickled, fermented, spiced, aged and dried foods. I call Sonoma Ciounty the fermentation capitol of the world.” As any foodie can attest, you can’t turn a corner in towns from Healdsburg to Petaluma without running into an eatery or merchant offering kombucha, kimchi, fermented meats and cheeses.

This show will unlock the magic behind these foods and demonstrate how they transform a raw ingredient into something that is spoiled to perfection. Garrett Martin, a winemaker for Joel Gott Wines will host the pilot episode of Spoiled to Perfection. Amy Vogler (Wooden Spoon Kitchen), a highly-regarded cookbook writer and culinary consultant, is onboard as head researcher and overall food maven.

We are currently in production for our second episode. The show will be formally premiered at Jennifer Harris’ upcoming Farm to Fermentation Festival https://www.farmtofermentation.com/ on August 22nd at the Finley Center in Santa Rosa.