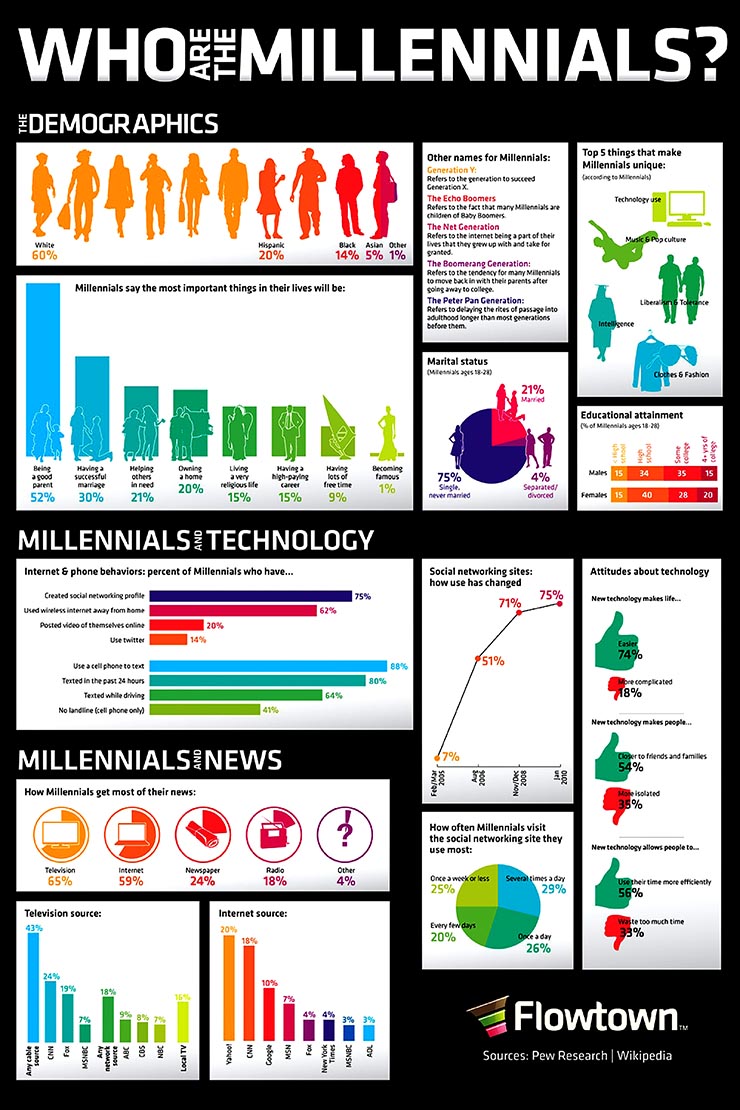 The Millennial generation, aka “Gen Y,” are those men and women currently aged 16 to 34 years old. Children of the demographically massive baby boomers, in about eight years, there will be 64 million adult millennials, at which point
they will surpass boomers as a percentage of the adult population, and become the largest living generation in America

DRIVE (AND ARE DRIVEN BY) SOCIAL MEDIA

Millennials are active advocates of social media to broadcast their preferences and influence the choices of friends, or even perfect strangers. They are the first generation that regards tweeting and texting not as astonishing innovations of the digital era, but as everyday parts of their social lives and their search for understanding the world around them.

LESS AFFLUENT THAN THEIR PARENTS

They were the generation that was hit the hardest by this recession in terms of layoffs and difficulty finding jobs, and it really shows in their food purchasing habits Millennials don’t have a lot of disposable income and therefore more price conscious than many had anticipated.

MOST DIVERSE POPULATION GROUP IN US HISTORY

They are the most ethnically and racially diverse cohort of youth in the nation’s history. Diversity and authenticity are key to attracting Millennial. E.g., they are increasingly interested in ethnic food options and hanker for authentic diversity.

This is a generation that has no trouble with hybrids of any sort, provided the result has some sort of authentic heritage…and is delicious.

WANT TO BE TREATED AS INDIVIDUALS, NOT A CATEGORY

One size definitely will not fit all and they’re often wary of anything that carries the whiff of mass production. Having it their way is their way.

Millennials favor fitness and understand more about healthy foods and ingredients than their parents or grandparents did at the same age. Yet many think nothing of indulging if they can assuage their conscience with the knowledge that the treat is “all-natural” or “organic.”

This topic, in particular, reveals the perils of making broad generalizations about a demographic that spans nearly 20 years. Certainly the eating habits of 18-year-old college students differ from those of 28-year-olds who are well into their adult lifestyles.

Millennials wear their social consciences on their sleeves. Terms such as, organic, free range, cruelty-free, locally grown, grass-fed, hormone-free resonate with them, They are sensitive to animal welfare, interested in the local-food movement and prefer all things natural.

BUDGET CONSCIOUS…UP TO A POINT

Millennials – while focused on paying as little as possible for products – are also much more willing to pay more for specific attributes in food, such as organics / natural, ethnic and specialty foods. They are also very willing to pay a premium for organics — and more so than their parents. In fact, one in 10 millennials responded that they’d pay over 20 percent more for organic — and their willingness applied to GMO-free products as well. In other words, millennials are putting their money where their mouths are.

Millennials want fresh food, sure. Organic food, too. But the truth is that they aren’t as self-righteous about it as their parents were at the same age, for that matter, are today.